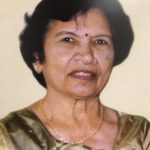 When I first  met Mr. Bera a couple of weeks ago, the thing that struck me the most was his warm smile and the way his eyes lit up when he talked about his late wife, Kanta. It was such a joy talking to him and getting to know his wife through his words. Here is his story in his own words:

“My beautiful wife, Kanta, was born in the western Indian state of Gujarat on April 29, 1934. We were lucky that Shree Bhagavatsinhji ruled our state; he was highly educated and believed in a women’s right to education. Kanta finished her elementary education in Gomta; during that time, India was fighting for its independence from the British Raj. Her parents were very progressive and sent their daughter away to Rajkot for middle school after grade 6.

A farmer’s daughter from a small village Kanta moved to Rajkot and was surrounded by all kinds of girls from different backgrounds. It was a difficult transition, but she persevered. She became a champion for the underprivileged and marginalized community members, especially women. Her summer vacations were spent traveling to different villages and talking to people about equal educational opportunities, women’s rights, changing harmful orthodox customs, healthcare, domestic violence, and so much more.

On her trips, she was often met with angry villagers, who didn’t want to change their traditional ways. During this time, she also wrote plays about social justice and had children perform them. As India became independent on August 15, 1947, many changes came about in the country’s educational system. The result of that changed Kanta’s mind, and she decided not to pursue medicine and chose the field of education and social work instead.

During the summer of 1952, there was a Sevadal Camp, where boy and girl scouts were volunteering and organizing the opening ceremony of the Somnath Temple in the city of Veraval. The President of India, Rajendra Prasad, attended this event. It was at this event that we met. We had volunteered for many of the same activities and events, but we finally connected at this event.

Although we both had similar values, Kanta had no intention of getting married; instead, she planned to devote her life to the service of others.

After Kanta passed high school, her parents, who were now getting older, wanted to move to Kenya with her older brother. But they didn’t want to go and leave their youngest daughter alone in India. So, she said yes to marrying me, Babulal Bera- the man with a plan, and I am forever grateful that she did!

Married life was tough, as both of us were going to school, working, and doing social justice work. I came from a much more impoverished family than Kanta, and I wanted to make sure she was happy and always taken care of. We both worked very hard and had our first child, Rajesh, in 1956. She took care of the baby and three of my teenage brothers who lived with us.

I came to the US in February 1958 to study Chemical Engineering at the University of Southern California. Rajesh and Kanta joined me in July 1960. Kanta decided to go back to school and graduated from Cal State Los Angeles in 1965.We had our second son, Rimal, in 1961 at Hollywood Presbyterian Hospital. We had no relatives or family members, but beautiful friends surrounded and supported us.

Kanta was always a progressive thinker and applied for a California teaching credential and was qualified to teach in California Public Schools and Community Colleges. Her first job came as a fifth-grade substitute teacher for 52 students at a private Catholic School. She was nervous about being brought up Hindu, she was still a bit shy about her language skills, and she had to interact with children from a completely different culture. But Kanta overcame her nervousness and worked hard and thrived at her first teaching job and every job thereafter.

During this time, our relatives in India and Africa started coming to the US after graduating from High School. We solely solidly believed that education, especially higher education, was the key to success in life. Most of these relatives pursued their education at Cal Poly Pomona, primarily in the fields of Electrical and Mechanical Engineering.

We bought our first house in Downey and Kanta took care of everyone, along with working full time. Our house became a transit point for many relatives coming from India and Africa. We even converted our garage into a large bedroom to help them out.

I helped many students get jobs at my company while Kanta shuttled them back and forth from school and work. Eventually, we became US citizens and sponsored about 300 relatives.

Kanta has been an inspiration to so many women throughout her life and even after. She broke many barriers for the women in our community: the first girl to go to Rajkot for high school, the first one to work in the government office, the first one to have an undergraduate degree, and the first one to go to America for further study. Even though life started out difficult for her, she always made the best of her situations. She took care of her own family, a large number of relatives, worked full time as a teacher and did all this with unconditional love and patience.

Aside from all this, she built an all- girls high school with a boarding facility for underprivileged girls called “Kantaben Babubhai Bera Kanya Vidhalaya.” She also created an all-purpose community hall in Sidsar, Gujurat, India, which is used for weddings of young women from families who could not afford a proper wedding and would then be subjected to societal shame based on local traditions.”

MED &MFA. Director of Content & Marketing, Citizenship Coordinator, SAHARA Tami has 16 years of experience working with diverse and marginalized populations from all over the world. She is an author of three books and has written multiple articles for the Huffington Post, Medium and Thrive Global. Working at SAHARA allows her to combine her love for sharing stories of empowerment along with her dedication to help diverse and underserved communities. She has been with SAHARA since 2017.